On Platform.sh, an environment is a logically separate instance of an app or group of apps with all of the services needed to run the app.

You can think of an environment as a complete working website that’s related to but safely isolated from others in the project. So you can run tests and review a complete working copy without worrying about damaging anything in production.

Each project includes multiple environments, often divided into environment types. If you have a live site, you have at least a production environment. You may also have additional environments for development, testing, staging, review, and so on.

New environments can be created by branching existing environments using the command line interface (CLI), or in the Console. Each created environment is an exact replica of its parent environment. This means new environments have all of the data and services from the parent (like databases, network storage, queues, routing).

To organize your environments, you can create hierarchical relationships.

An environment is tied to a Git branch and can be created on demand. With Bitbucket and GitHub integrations you can even get a “development server” automatically for each and every pull request.

You can have branches that aren’t tied to a running instance of your application. These are called inactive environments.

If you subscribed to a production plan, this environment is your live site and you can give it a custom domain name and a custom SSL certificate. 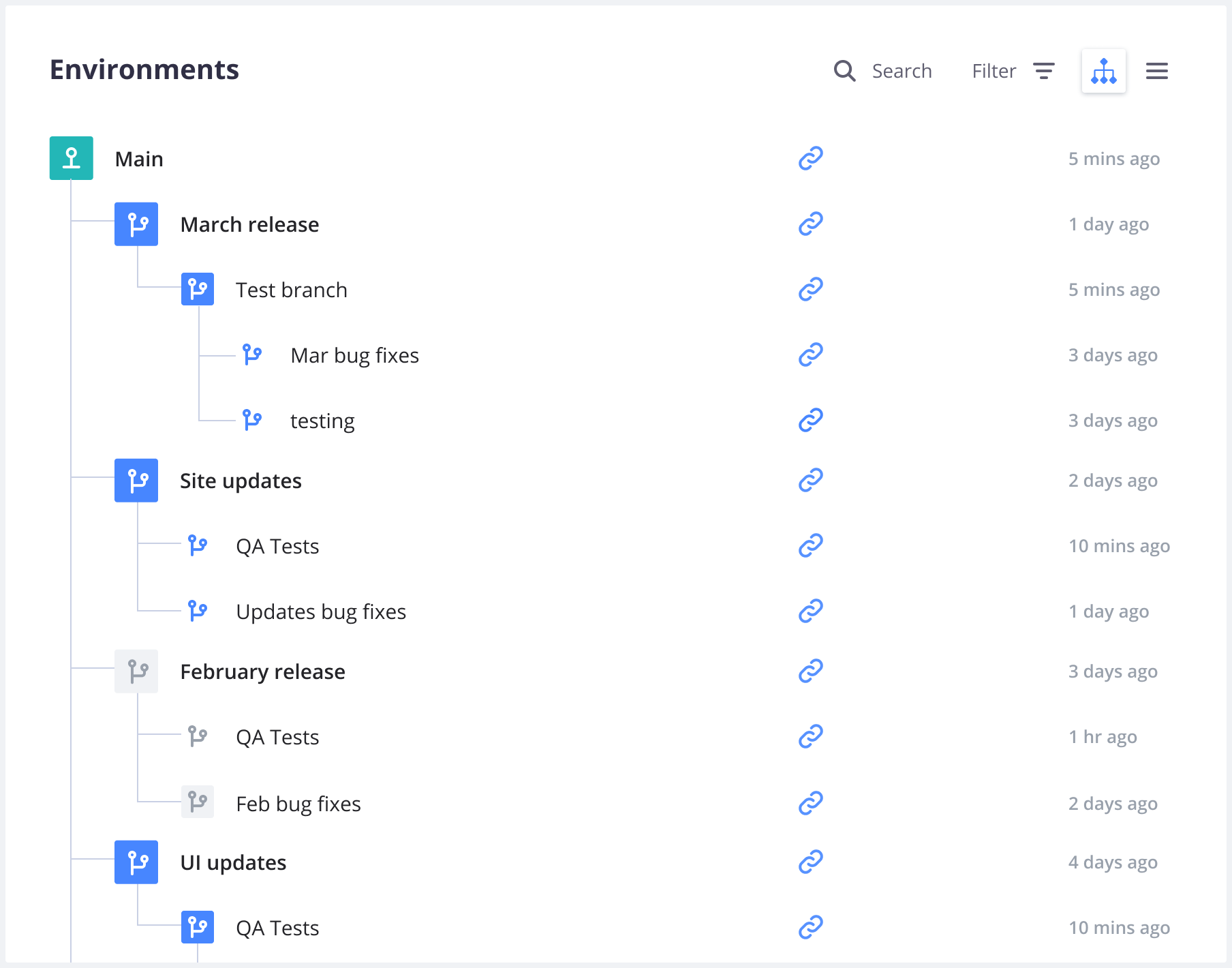 In Platform.sh, your environments are organized in a hierarchy. Each new environment you create is considered a child of the parent environment from which it was created.

When you branch an environment to create a new child environment, its parent is the environment it was created from. If you push a branch through Git or a source integration, the parent defaults to the default environment.

You can always change an environment’s parent.

Since you can organize your environments as you want, you can create your own workflows. There are no rules you must follow when branching environments.

You can choose a structure that might best fit your workflow. Some possible approaches:

Here is an example of a possible Agile workflow.

The administrator can then sync the next sprint’s environment with the Live environment to repeat and continue the development process.

You can organize and work with your development environments in many different ways. It can help to introduce a convention for how you name and structure your environments.

The name should represent the environment’s purpose. Is it a Staging site to show to your client? Is it an implementation of a new feature? Is it a hotfix?

If you use Agile, for example, you could create hierarchical environments and name them like this:

If you prefer splitting your environments per developer and having a specific environment for each task or ticket, you could use something like this:

Your environments can have one of two statuses:

You can see an environment’s status in multiple ways:

See how to change an environment’s status