Variables give you control over your project’s build process and runtime environment. You can set them in your code to make changes across your project or independent of the code for environment-specific settings.

In this way, your app has additional information, such as database credentials, the host or port it can use, and which server to connect to.

You can set variables at different levels. All variables can be strings or base64-encoded JSON-serialized values.

The following table defines what types of variables are available to you:

All of the variables can also be overridden via script.

Choose how to set the variable based on what you are trying to do.

Some environment variables should be the same for all environments. For example:

Other configurations should vary between environment types. For example:

If the names of variables at different levels match, an environment variable overrides a variable with the same name in a parent environment and both override a project variable. All variables can also be overridden via script.

For an example of how the different levels work, suppose you have the following inheritable variables defined for the main environment:

And the following variables defined for the feature-x environment, a child environment of main:

While in the feature-x environment, it looks like this:

To get a visual overview of which variables are overridden in an environment, navigate in the Console to that environment’s variables settings. This example shows how it looks within the feature-x environment: 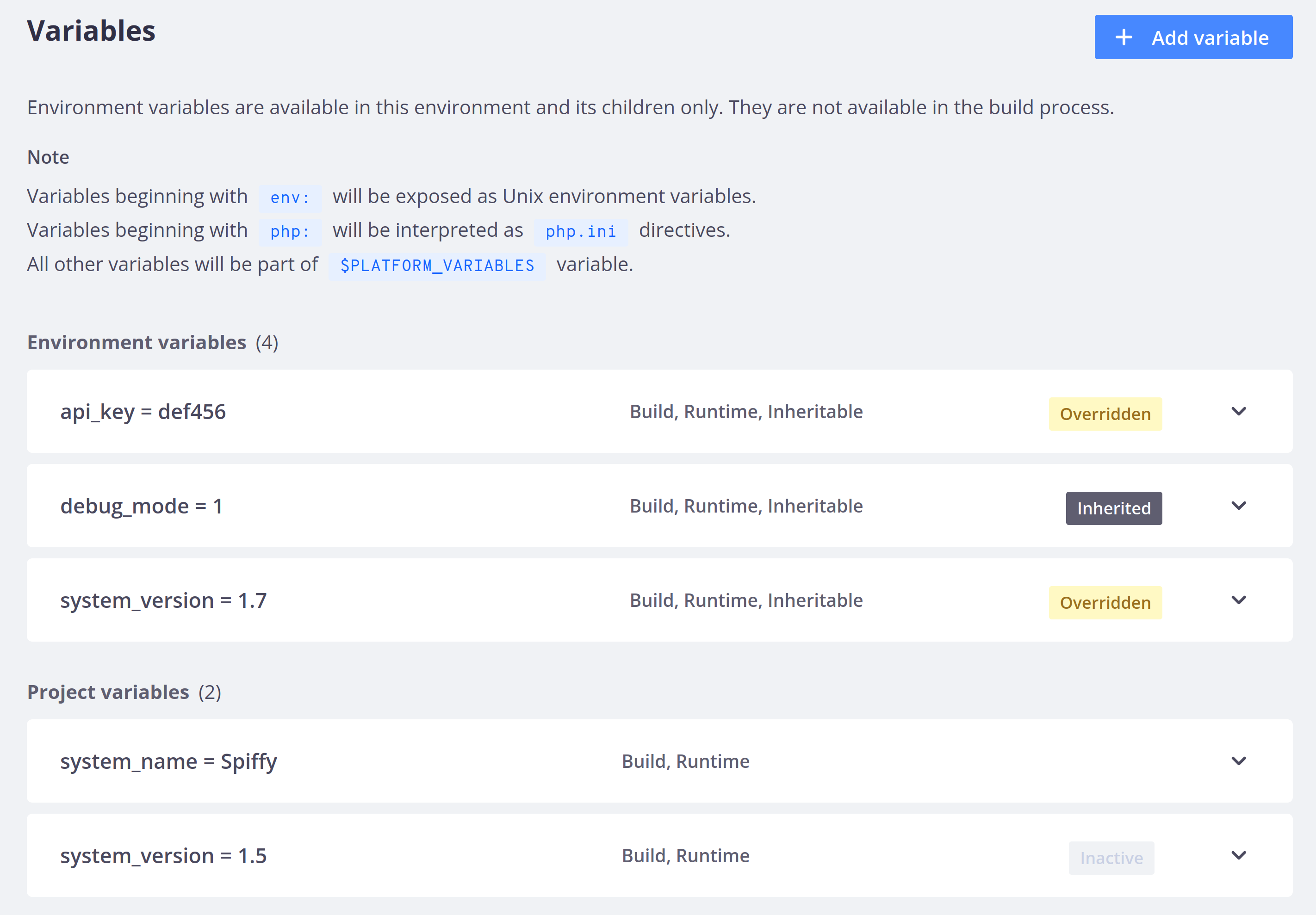 Certain variable name prefixes have special meanings. Some are defined by Platform.sh and apply automatically. Others are just available as a convention for your application code to follow.

You can then access that variable directly in your app container:

Any variable with the prefix php: is added to the php.ini configuration for all PHP-based application containers in the project.

For example, an environment variable named php:display_errors with the value On is equivalent to placing the following in php.ini:

This feature is primarily useful to override debug configuration on development environments, such as enabling errors and configuring the Xdebug extension.

To apply a setting to all environments or have a setting differ among multiple PHP containers in one project, specify the variables in the .platform.app.yaml file for your application. See the PHP configuration page for more information.

For specific frameworks, you can implement logic to override global configurations with environment-specific variables.

The Drupal templates show examples of logic mapping variables to Drupal’s configuration system. You can apply similar logic for other frameworks.