Control your apps and how they’re built and deployed on Platform.sh with YAML configuration. 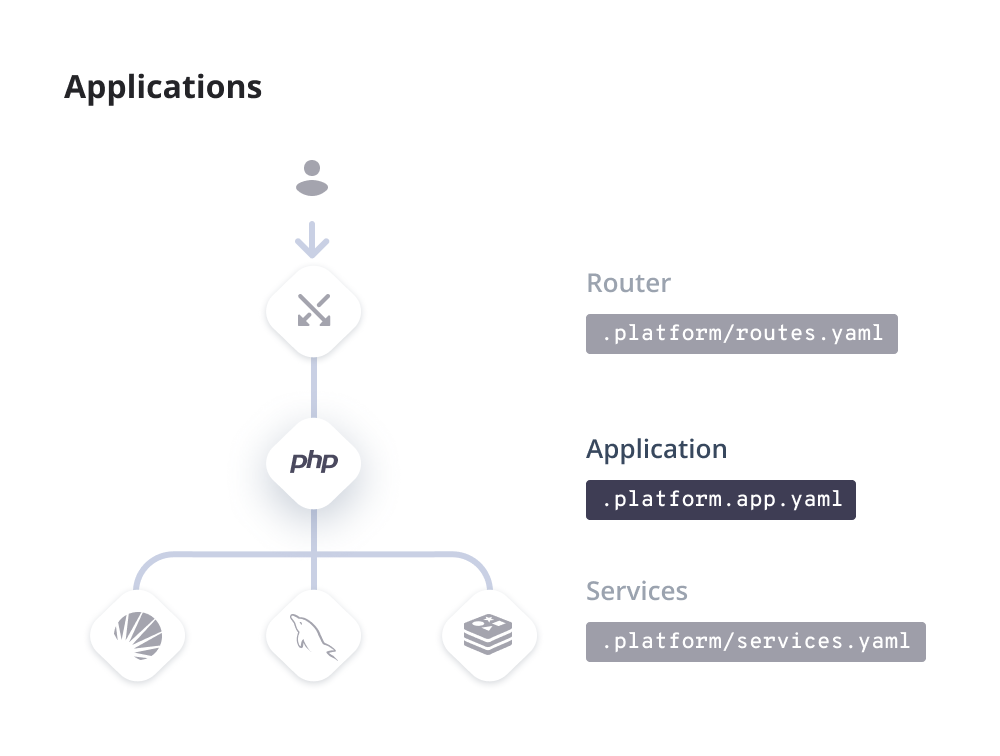 Within a single project, you can have one or more apps and each app can have multiple instances. Instances are where the same code can be run with different configurations, such as one for external communication and one for background processes. All of the apps and instances are configured with the same syntax. You can find a complete reference of all possible settings.

To create a very basic app, you need a few things:

The following example shows such a basic setup for PHP:

You might have multiple apps you want to run from a single Git repository, such as a RESTful web service and a front-end or a main website and a blog. In such cases, you configure each app separately and define the relationships among them. See the various ways to set up a multi-app project.

If you want to use one of the databases or other services Platform.sh provides, set it up by following these steps:

Control the build and deploy process

Your app generally needs to undergo some steps to be turned from the code in your Git repository into a running app. If you’re running a PHP or Node.js app, this starts with the build flavor, which runs a default set of tasks. Then any global dependencies can be installed.

Once these optional tasks are done, you can run hooks at various points in the process. Hooks are places for your custom scripts to control how your app is built and deployed.

Once your app is built, it needs a defined way to communicate with the outside world. Define its behavior with a web instance. There you can set what command runs every time your app is restarted, how dynamic requests are handled, and how to respond with static files.

Response compression reduces payload sizes and generally increases your app’s response times. Dynamic responses generated by your app aren’t compressed because of a general security issue. While your app can compress its own response, doing so when the response includes any user-specific information, including a session cookie, opens up an attack vector over SSL/TLS connections. For that reason, you generally shouldn’t compress generated responses.

Requests for static files that are served directly by Platform.sh are compressed automatically using either gzip or Brotli compression if:

Also, if there is a request for a file and another file exists with the same name plus a .gz or .br extension, the compressed file is served regardless of the original file type. So a request for styles.css that accepts a gzipped file (according to the request headers) automatically returns a styles.css.gz file if it exists. This approach supports any file type and offers some CPU optimization, especially if the cache lifetime is short.

The following example shows a setup for a PHP app with comments to explain the settings.